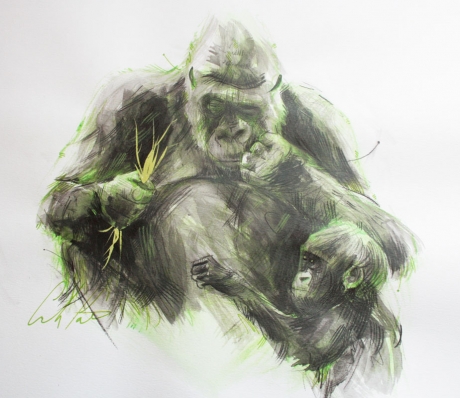 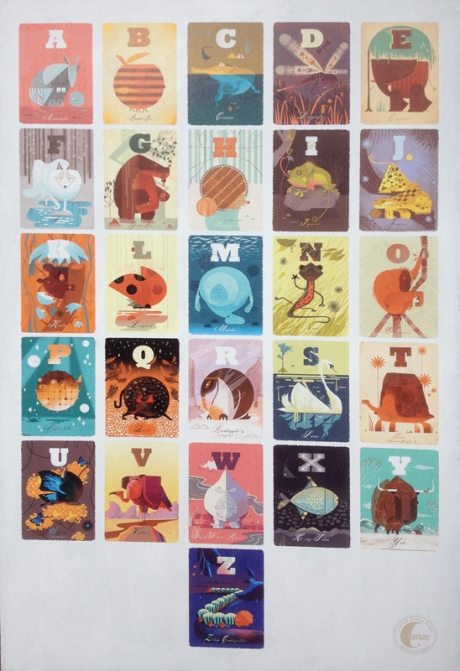 All Creatures by Graham Carter is now in full swing, with the gallery being transformed into a veritable zoo of fantastic new animal inspired art. We caught up with Graham, for a bit of monkeying around in his Hove based studio to find out more about his latest body of work, and amongst other things, the inspiration for his brilliant bee survival kit. Have a read to find out more about this hugely talented chap…

For the past couple of years I’ve been working on these A-Z alphabet prints. I got to a point where I was halfway through designing one and to spur myself on a bit I thought if I aimed to have an animal based show, it would give me a good reason to finish the whole set and workout a exhibition that revolves around it. I’ve had three other shows at ink-d so I always try to have some sort of theme in there. It’s been fun researching the animal theme, I watched a lot of nature programs. With the A-Z prints I’ve come across a lot of animals I didn’t know existed. Although I enjoyed doing all the animal prints I did miss doing people, so I’ve tried to combine that by having these people in various animal costumes.

When you make the A-Z prints is it set in your mind how you want the final thing to look or is it more a case of playing around?

It’s more playing around. Some of them are quite quick because the image is already in my head. But some of them do require a bit of changing and moving things around on the screen because I do a lot of design in Photoshop. I want the images to have a 3D quality to it, with a collagey feel.

What’s the process like for your 3D wooden pieces?

It’s never quite the same as when you see it on the screen and I quite like that. Although the design process is quite tight in Photoshop you always have to send the work off to get laser cut, so I get all these jigsaw pieces of work back and you have to paint the wood or make a choice to varnish it. You can never plan those things on a screen; each piece has its own little quirks that you never expect. Coming from a slight design background I like to know roughly how it’s going to look but it’s good to have that slight bit of chance as well.

Do you start off with a sketch on paper or work directly into Photoshop?

It’s half and half really. Sometimes I use a little thumbnail sketch in a sketchbook, which I’ll scan in and work around. But there are some days when I’ll skip that part and work straight into the computer. It’s different each time but more often than not it starts off with a sketch.

Your show ‘All Creatures’ is very animal themed. Do you have a favourite animal?

It’s definitely the apes because I’ve always loved drawing them. For the show I’ve included some of my ape drawings. Since I was about 15 I’ve been doing biro drawings of them, I always loved the expressions you get on their faces. I like the challenge of trying to get across their power and character.

Do you have a favourite design from your latest A-Z series of prints?

I always liked the orang-utan and the manatee. There was a case of trying to capture that underwater light. Something that crops up in my prints quite a lot is light and colour; I’m always trying to achieve a certain kind of magic, I know it sounds a bit corny. It’s quite hard to do. Where you place the colour in relation to another colour can have a strong visual impact and that’s what I strive for in my prints.

Do you work on each letter separately or on a number of them simultaneously?

I was never really sure how they were going to look as a whole. I tend to work on about 3 at once so I can have a bit of rest from one and a take step back, then return to it with fresh eyes.

What has been the main source of inspiration for the latest body of work?

As well as animals I’m quite interested in antique posters and end of pier style machines from bygone times. I wanted to do a show based of those; in some respects I’ve started to eek into that a bit and try and combine the two. Like in the case of the 3D baboon it’s like an antique slot machine, which I imagine you might have found on a Victorian pier. Eventually I’d like to make something that has that function to it as well, so you pull a lever and it does something.

Which other artists do you admire?

I really admire Jamie Hewlett’s work. I like the way he started off doing comic books then went into music videos, animations, operas and takes his work to a larger scale. I admire his drawing skills as well. David Hockney is another one. As far as storytelling goes the Studio Ghibli films; that grounding in reality that goes into fantasy/fairy tales that are believable, set in a world that you recognise. That’s what I’ve been trying to do in a lot of my prints. It might look like a real scene but there’s something quite magically happening.

Finally which of the new works in the show are you most proud of?

For this show it’s probably the bee kits because it was initially such a throw away idea. I just liked the silliness of it. It has a bit of a message to it and it has in fact saved a bees life. When you combine the design, artwork and a message and it’s a fun thing, that works for me. I had heard a radio broadcast where they had a nature specialist in who was talking about plants to put in your garden to attract bees and what you can do to help them. It was the first time I heard about the sugar and water thing to give them a boost, for there I made up the bee revival kit…

END_OF_DOCUMENT_TOKEN_TO_BE_REPLACED 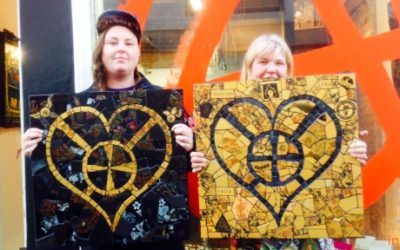 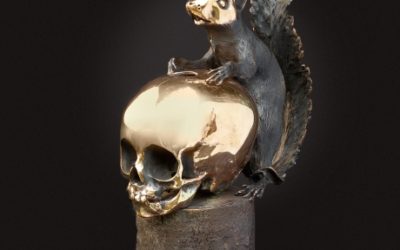